If you’re as excited as I am about the beginning of this year’s Major League Baseball regular season, you’re in good company of all the fans sharing the excitement on social media.

I took a look at what’s piquing the interest of U.S. baseball fans, and the results were surprising. Fans were interested in finding out which the prospects they should keep an eye on, and predictions of this year’s team performances.

But overwhelmingly, fans were most interested in making baseball opening day a national holiday! Fans expressed their desire to not take a sick day to catch the game at the ballpark.

Former St. Louis Cardinal shortstop Ozzie Smith, along with Budweiser, have petitioned the White House to recognize the opening day of our national pastime as more than just the first day of a sports season.

It was also interesting to see that for the past 30 days, baseball fans were sharing the story across all social networks, but Facebook in particular. 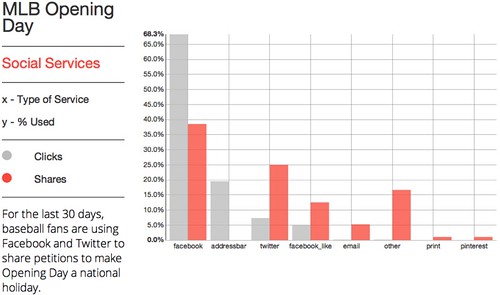 Twitter, address bar sharing, and e-mail were top ways information about the petition was being shared.

And it worked. The petition needs 100,000 signatures for the White House to review, and by the time I researched for this post, it had over 102,000!

So, do you also think baseball opening day deserves to be a holiday?