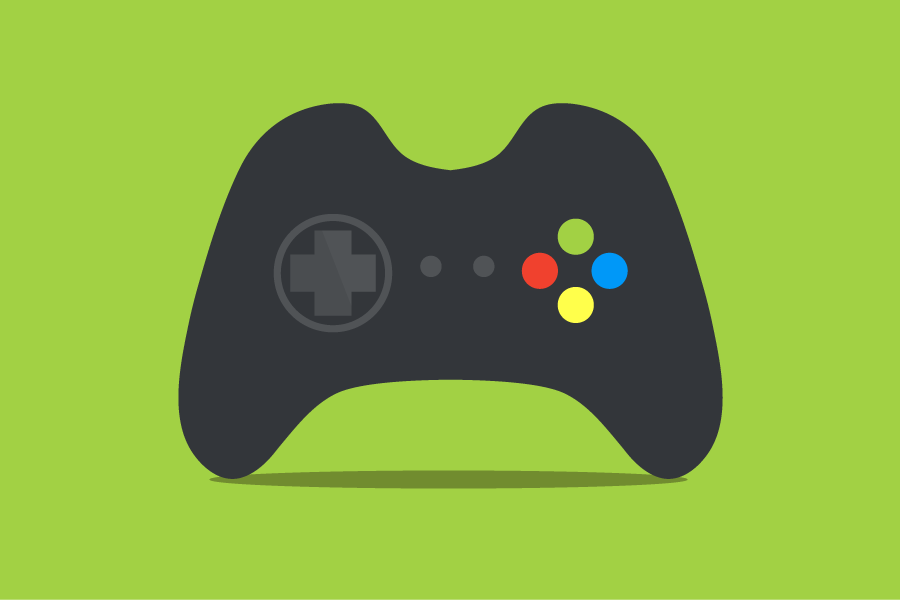 The video game industry has thrived even in the midst of a recession. Revenue is over $60 billion a year, and projected to reach $82 billion by 2017. Even so, marketing is critical to make games stand out in a bulging supply. With the growth of social media, how has searching and sharing represented sales for video games? Are there predictors in the strength of a release?

I chose a few games to examine, which were top sellers in 2013:

Technical Notes on the Process

The first step in addressing a data-driven hypothesis is to have data. Each game has common metadata points: release date, announcement of development, developer, title, antagonists, protagonists, all of which can be used to identify a search or share related to the game. Using Hydra, these search terms were used in regular expression queries against search and share data streams to find searches and shares by day in a date range surrounding the release date.

For an example, here is the structure of the query for share data in the Spawn query interface:

The query executed on a tree which looks like this:

The query starts by going into the share root node and then into the ymd branch. The subsequent branches are dates, so here I specify the range using @ followed by the start date (inclusive) and the end date (exclusive). I include + before the range because I want the date value in my query results. This is followed by the title branch, which contains the titles of shared posts. It is here that I use a regular expression to search the titles using | followed by the expression.

The results gave some interesting insight into social activity. Share activity was not on the magnitude that sales were, so they’ve been evenly inflated to show the trends. The volume totals week to week, and the deltas (change from week to week) are the basis of analysis. 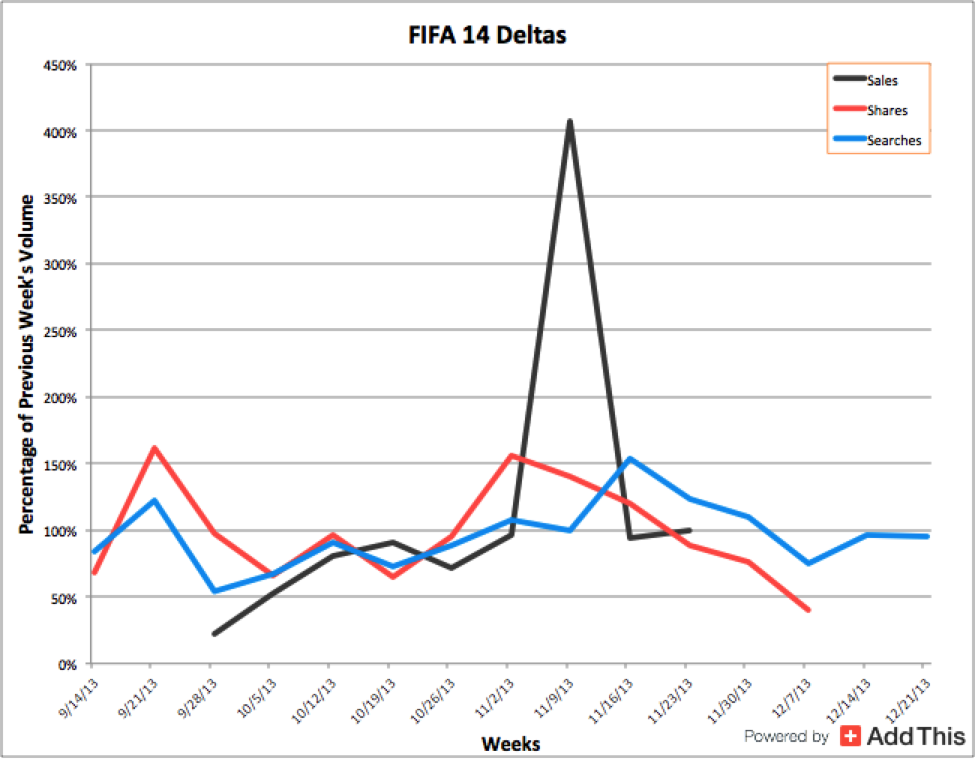 Comparing the deltas week to week, share and search volume for FIFA 14 are very tightly coupled surrounding the first ten weeks of sales. There is a spike in sales from the staggered release of FIFA 14 on PS3, Xbox 360 and PC for the week of 2013-09-28 to PS4 and Xbox One in 2013-11-16 and 2013-11-23 respectively, which also follows the preceding spike in share. 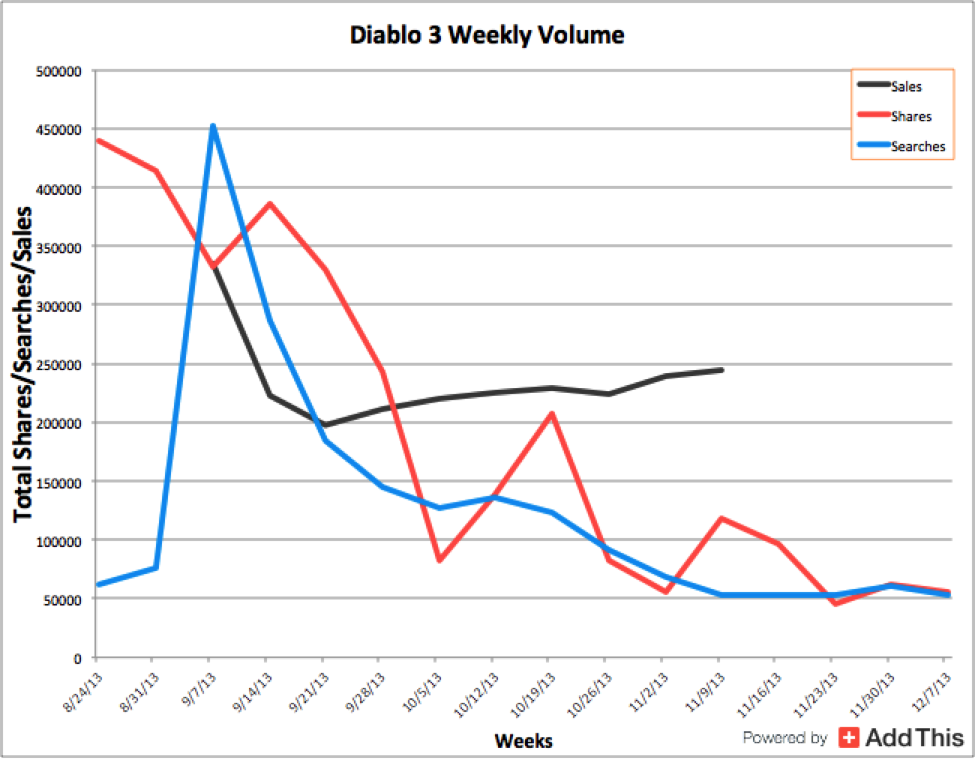 Sales for Diablo 3 can be seen as sustaining and even rising over the ten week view. Search activity maintained a steady decline after the release, but sharing spikes continued as search fell. This is due in part to the announcement that the controversial in-game auction house would be closing the following year. Nonetheless, consumers continued to go after the game. 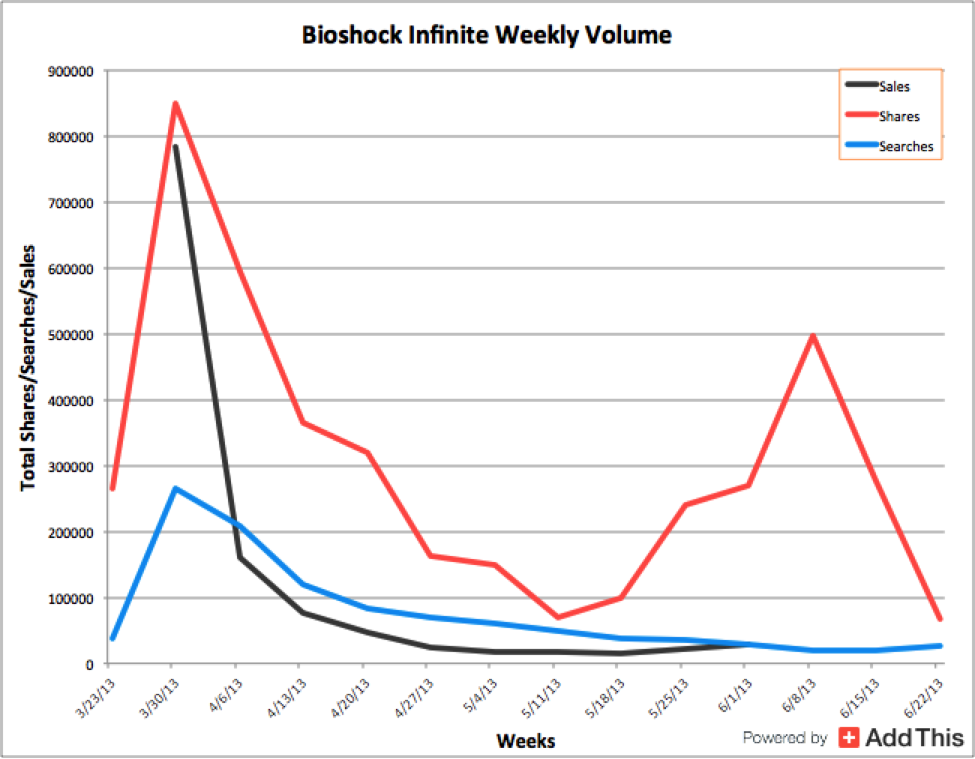 We can see in Bioshock Infinite that the volume of sales dropped just as dramatically as the search and share volume. Both search and share raced to their peaks for release day, but fell until another sharing spike from an announcement of DLC last July. 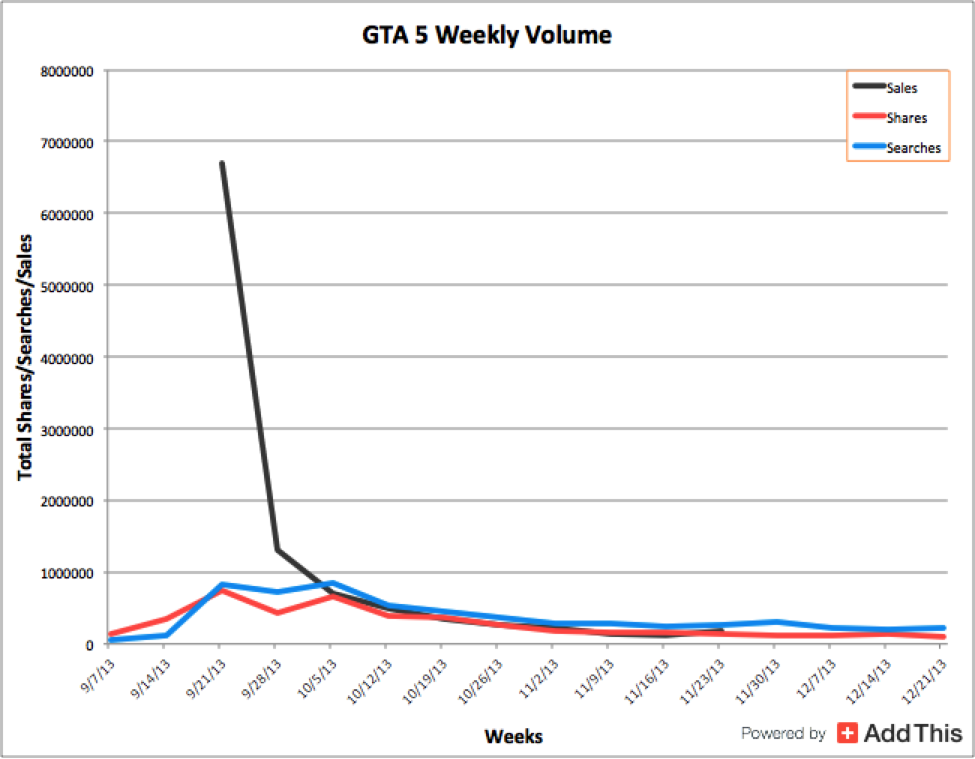 Grand Theft Auto 5 had one of the biggest releases in 2013, selling over 6.6 million copies in the first week in the US alone. Comparing the volume, it dwarfs the search and shares leading up to the release. But looking at the deltas which follow, it’s clear the game had significant buzz. All three lines remained even over the ten weeks. 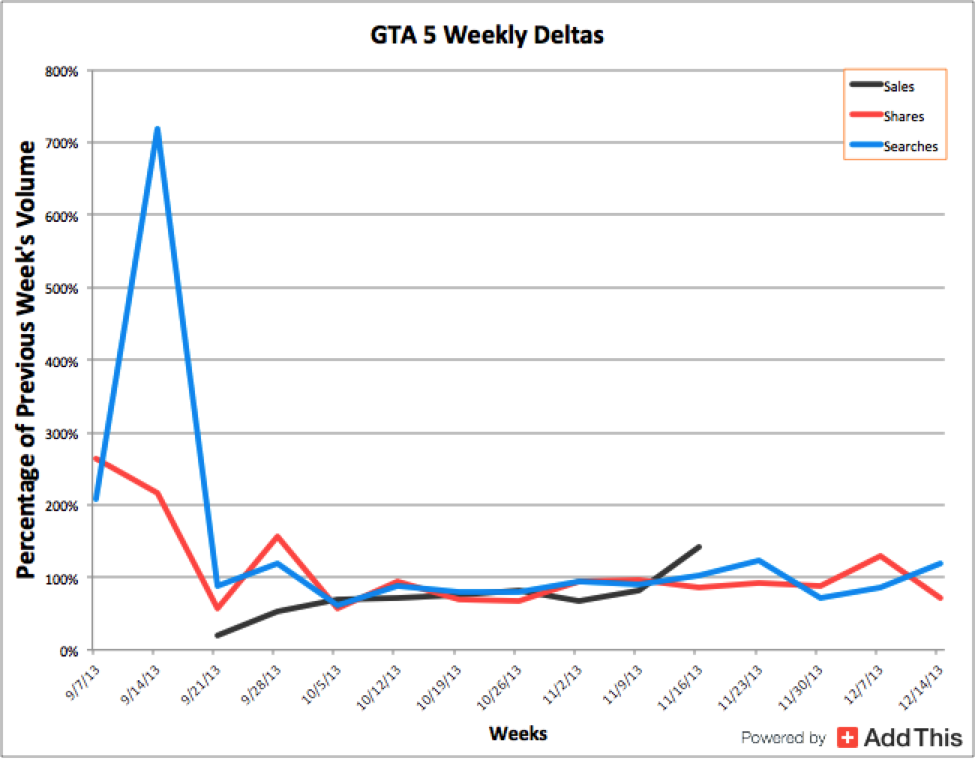 The relationship between sharing and searching and sales gives the indication of engagement. Sharing interest gives a clearer picture of the interest than just search. Video game publishers would do well to continuing to invest in direct communication with gamers via social media. This may include marketing announcements, but also gameplay videos, user generated content (such as in Spore and sandbox videos), or screenshots taken from inside the game. The goal being, keep the game in the forefront of people’s minds and showing the strong user-base.

Thanks to VGChartz for in-depth sales metrics!