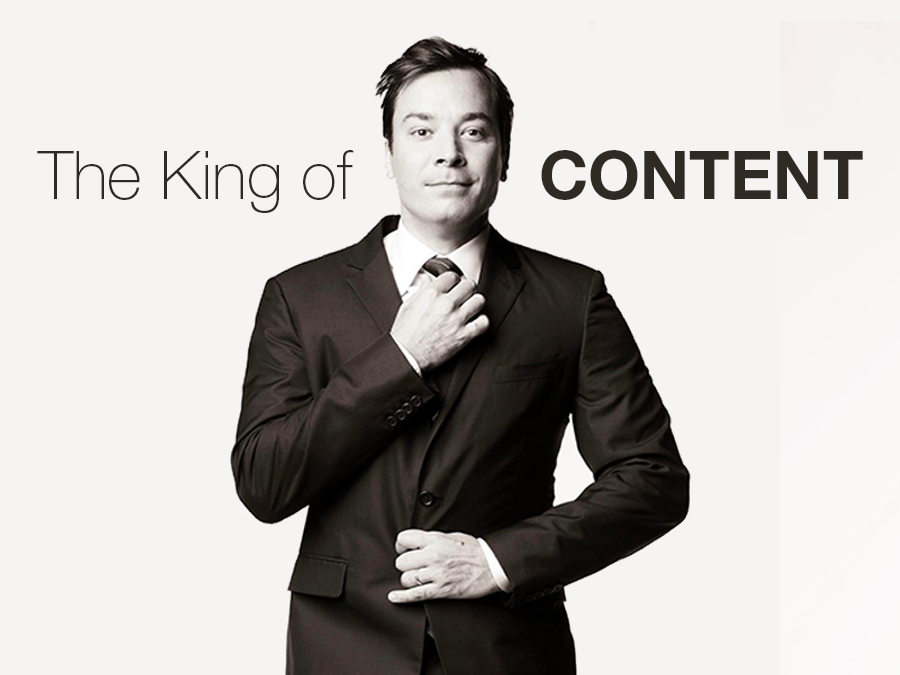 Jimmy Fallon is one of my most favorite comedians today. His spunky demeanor, and hilarious script-writing are just elements of what makes him so successful. But his knack for understanding what his fans love to share, makes Jimmy Fallon our vote for King of Content.

Back in February, Jimmy kicked off his new gig at The Tonight Show with an explosive show that featured U2 headlining. The show’s new host and incredibly popular headlining rock band got the web buzzing to new heights.

Jimmy Fallon is no stranger to the web, so to see a 11,000% increase in social mentions of a popular celebrity after his first Tonight Show aired on February 17 is pretty neat. He nearly matched that spike when he invited Justin Timberlake to his show five days later.

Jimmy’s social mentions (meaning shares and clicks on content about “Jimmy Fallon”) leveled off after a bit, but he generated good spikes after a few key airings:

These clips of the hilarious sketches were talked and shared about in enormous waves. Facebook was the top service used to share Jimmy’s latest skits. 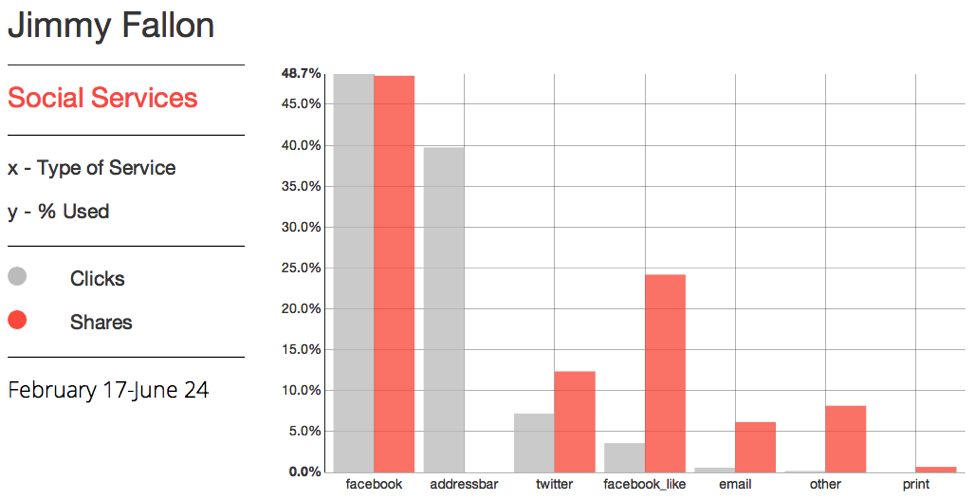 Most of his fans shared content almost as equally between desktop (51%) and mobile (49%), though twice as many mobile devices used were iOS than Android. That goes to show when content is good and easily sharable, the sky’s the limit when it comes to engaging your fans, and making them love you more.

Speaking of love, if you’re a Jimmy Fallon fan, you’ll enjoy reminiscing with this list of the top shared and clicked content we’ve seen so far:

The list of blog posts and YouTube videos that were shared about Jimmy goes on and on. He understands how his fans like to share content, and provides them with high-quality clips of the popular sketches on his YouTube channel, which then gives his fans and news media great content to include in their own sites. Jimmy’s name is plastered all over the internet, and this is why he’s awesome at content.

Get your content to be as awesome as Jimmy’s. Start with checking what is popularly shared on your site by signing into your AddThis dashboard, and give your audience useful, funny, and unique content they can’t get anywhere else. That’s the Jimmy Principle.

What are your thoughts?