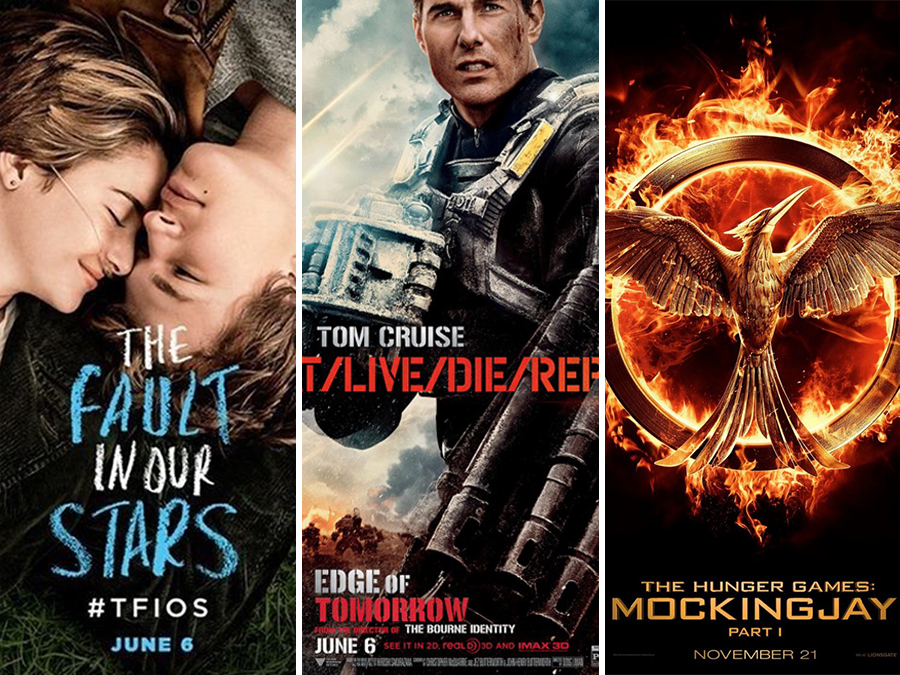 Movie adaptations from books is nothing new, but 2014 has been an especially big year for this. We looked at the top books and movies from 2014, and found trends on the social web that would be useful tips you can plug into your content strategy––no matter what type of content you publish.

We looked at the young adult books turned to movies so far this year, and found Facebook is the service most used to share content. Looking at the 30 days surrounding each movie’s release, we found Facebook sharing makes up about 30% of each movie’s shared content.

With The Hunger Games: Mockingjay – Part 1 release in November, and The Fault in Our Stars DVD release on September 16th, it isn’t too late to engage these young adult fiction fans.

Even though Gone Girl isn’t set to hit the theater until October 3rd, and Wild isn’t out till December 5th, these two movies caused strong spikes in social mentions this summer. Movie adaptations released this summer typically saw a strong spike in engagement during the week of the release, but these movies are seeing engagement increases months before the release.

The hype about these movies is starting early, and viewers are likely trying to read the books before they see the movies later this year. Gone Girl and Wild were both New York Times Bestsellers, so many may have already read the book.

Tip: Spur online engagement by giving your readers even more content to look at. If you don’t give them a way and a reason to keep engaging, they won’t.

Having an existing fan base from the book may cause extra hype during the week of the movie release. While Edge of Tomorrow fans watched trailers, saw commercials, and read critics’ reviews, the fans were all new to the story and more likely to click or share content once they formed their own opinion. The Fault in Our Stars fans were already attached to the characters and the story before they saw the movie version, and were more likely to click and share content in anticipation of seeing the movie.

Tip: Take advantage of upcoming books-to-movie releases, or any event for that matter, to spark the conversation on your site. Some events, like movie releases and award shows, are things you can plan for in advance. So think of how you can hop on the bandwagon and engage your audience with trending content.

In the days before social media, people would read a book or see a movie and then tell their neighbors, friends, and family about it. Word of mouth was a popular way to suggest must-reads. Now, we have Facebook, Twitter, and email to tell our much wider network of followers and friends about the latest page-turner and the movie we saw this weekend. Because books that were adapted into films already have a strong online presence, it makes sense that the engagement only increases when a film is created. It’s important to understand how book enthusiasts and movie buffs engage online so we can tap into the fast network of entertainment fans at the right place and right time.