Whether Stores Are Open or Closed on Thanksgiving, Everyone Loves a Good Sale

The issue of whether stores should or shouldn’t be open on Thanksgiving has been an increasingly popular topic around the holiday. So much so, groups have formed to support stores that close to let their employees spend time with their families or just enjoy a nice day off. Either way, the data shows that most Americans are more passionate about the sales stores—open or closed on Thanksgiving—will have on Black Friday.

Everyone Loves a Good Sale

Black Friday’s been one of the most popular American traditions for the longest time but since 2011 retail chains have started opening earlier and earlier—to the point that they’re now opening on Thanksgiving evening. People are still lining up days before Black Friday to be the first to nab the deal they’re looking for.

In fact, stores that are open on Thanksgiving are still getting a good amount of shares (see the peak on November 11th).

Walmart, one of the stores planning to be open on Thanksgiving, was in many of the headlines—most of which were about one of it’s old stores being turned into a library and various Black Friday in-store sales ads. The story of a planned Black Friday strike demanding higher wages was also popularly shared, though this is not directly related to the store’s plans to open doors on Thanksgiving.

Nordstrom and Costco both issued public statements that they will not be opening their doors on Thanksgiving, and those stories were in the top shared articles. However, even among the brands that aren’t opening on Thanksgiving, the top shares revolving those brands were about their sales.

So what does this mean for your ecommerce site?

Your audience is going to be excited to see a special Black Friday specials in your storefronts (and Cyber Monday deals online). To help you get the word out, get sharing buttons on your promotional pages. 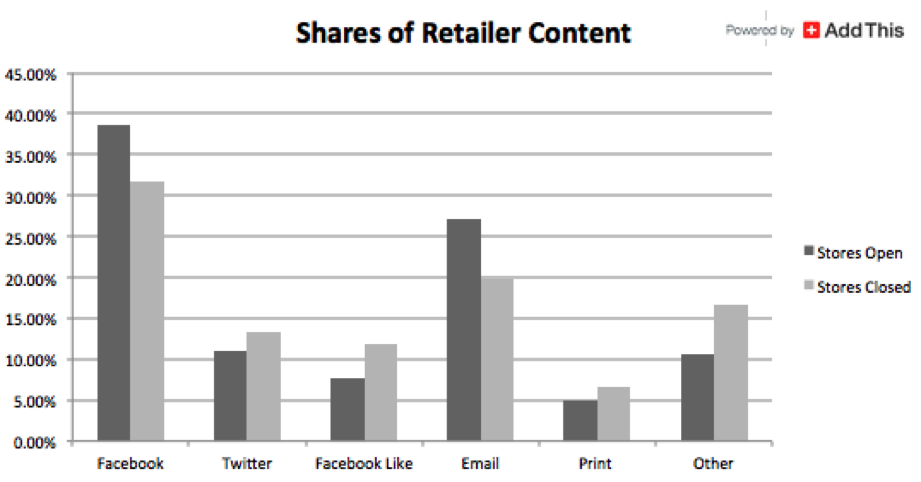 Across our network, we saw tons of promotional sales information being shared to top social networks. For both stores that are open and closed, content is being spread through Facebook and Email most frequently. And be sure to monitor your own social media sites as some people will ask questions about the promos being run or about your store in general.

Are you planning any Black Friday or Cyber Monday specials on your ecommerce site?