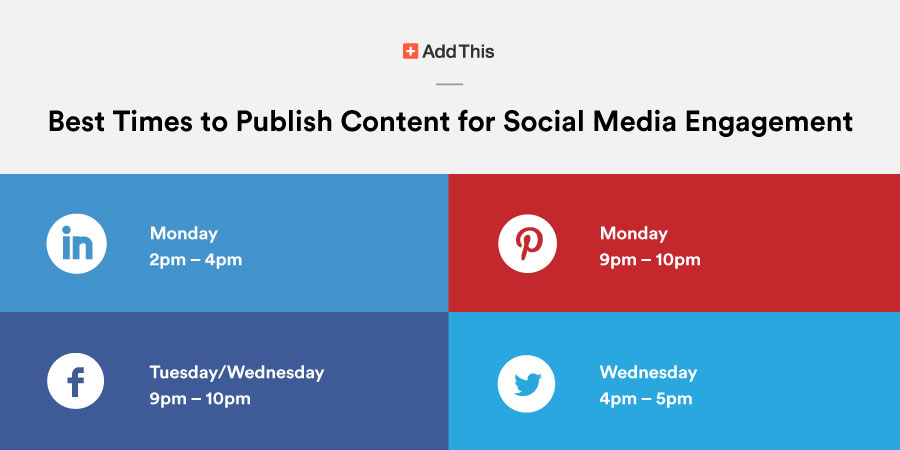 At AddThis, we’re constantly analyzing data from the 1.9B unique users we see per month across our network of over 15MM websites to learn how people are engaging with content. Last December, we published the best times to post on social media during the winter holidays. That post, as well as a similar one we did earlier that year, proved so popular that we’re doing it again.

Knowing when your users are active on social networks is useful, but it doesn’t tell the whole story. We analyzed data in both the United States (US) and in the United Kingdom (UK) to search for peak social engagement times – when users were most likely to click and share content – on Facebook, Twitter, LinkedIn and Pinterest. These findings are meant to help website owners get an idea of the best times to publish new content to maximize engagement on social media.

In the US, most social networks see a spike in shares during the morning hours. Shares in this case don’t refer to shares on Facebook or retweets on Twitter – instead, these shares refer to content being shared to a specific social network from its original digital source through sharing tools (e.g. share to Facebook, share to Twitter). This trend is especially true for Twitter and LinkedIn, which are sites that tend to attract early birds. Shares to Facebook get started a bit later in the day, and shares to Pinterest happen mostly at night.

With shares occurring earlier in the day, clicks tend to happen a little later across all social networks, mostly in the late afternoon and into the evening. Twitter and LinkedIn get the most clicks in the afternoon, while Facebook and Pinterest drive traffic after 8:00pm.

Peak Times of Day for Shares and Clicks by Social Network

Use this information to get more of your content shared across social media and help drive clicks back to your website:

*All times listed above are in Eastern Standard Time (EST)

Peak Times of Week to Post for Maximum Social Engagement

While each social network has peak times of day for shares and clicks, they also have certain days of the week during which engagement spikes. When you put all that data together, you get specific timeframes for which you should aim to post content for maximum shares and clicks.

*All times listed above are in Eastern Standard Time (EST)

Users rest on the weekend, and so can you. Since demand for content isn’t as high on Saturdays and Sundays, save your best content to be published during the 9-5 workday between Monday and Thursday. Sharing and clicking activity tends to die down on Saturday and Sunday across all platforms…except on Pinterest. In fact, some of the highest click activity on content shared to Pinterest occurs on Sunday night from 9:00-10:00! Note that users aren’t as willing to share content on Sundays, but there is definitely a demand to see new pins.

Unlike in the US, where clicking tends to happen much later than sharing, in the UK, sharing and clicking tend to happen within the same time period. This could be due to the fact that “Britons are slightly less digitally obsessed” or that social networks are blocked at many U.K. companies, resulting in less time spent on social networks overall, and less time spent during work hours. Much of the social activity in the UK occurs between 8:00-10:00pm GMT.

Peak Times of Day for Shares and Clicks by Social Network

The UK data is similar to the US when it comes to Twitter and LinkedIn (shares to these networks occur in the morning), as well as Pinterest (shares happen at night). The wild card here is Facebook. While users in the US tend to share to Facebook in the late morning and early afternoon, in the UK, that activity happens at night, from 8:00-10:00pm.

*All times listed above are in Greenwich Mean Time (GMT)

Peak Times of Week to Post for Maximum Social Engagement

Like social media users in the US, those in the UK are spending less time engaging with social media during the weekends. However, the exception is Sunday nights for Pinterest users, when sharing content tends to spike on this platform.

*All times listed above are in Greenwich Mean Time (GMT)

Use this data as a starting point to get to know your audience’s habits. You may find that – based on their gender, life stage or interests – they’re on a different schedule. With AddThis Social Sharing Tools, you can make it easy for visitors to share your content, as well as get in-depth analytics about how and when they’re engaging with your brand across different social networks. Get started!