Even if you don’t watch The Walking Dead, American Horror Story or Scream Queens, you’ve probably seen comments or reactions in your social media feed at some point. The Walking Dead has a very active group of followers online (3.8 million Twitter followers) who respond to the show across numerous social sites. They are encouraged to react to what’s happening in the series. In fact, their followers are so passionate that they helped spawn the popular talk-show follow up, Talking Dead, where they, you guessed it, talk about The Walking Dead. Fans of the show can engage by using hashtags and commenting during a live episode.

We took a look at our data to see how content about these TV shows has been interacted with across social media and the web over the last 90 days. Even before the shows aired, their audiences were active and engaged on social. Walking Dead led the charge with more than 50% of overall activity, but you can see that as shows gained popularity, so did their social activity.

So, what can you learn from these shows on how to leverage social media to build community and engage fans? We put together three takeaways you can start using today.

Despite all the noise on Twitter, hashtags aren’t dead. The Walking Dead does a great job of not only promoting their official hashtag #TWD (it’s usually in the bottom right of the screen when you’re watching), they also create other hashtags for big events or particular episodes, like a season premiere or finale. It’s a great way for fans to see what other fans are saying about an episode, react to something together, and for The Walking Dead to follow along with their community. Scream Queens engages with their audience by asking them to submit responses to questions using their official hashtag #screamqueens.

If you’re just starting out with hashtag marketing, pick a hashtag that is unique to your brand or product, but is also short and easy to remember. Just to be safe, make sure you search for the hashtag before using it to see what other conversations may be happening there. Lastly, remain consistent with the hashtag across your different channels.

2. Don’t Be a Zombie, Engage with Your Fans

It’s always exciting for your favorite brand or celebrity to reply to one of your tweets, to RT you, or even to start following you. It creates a two-way conversation, and is likely to foster more engaged followers and to encourage new people to start following you. The Walking Dead is awesome at this on Twitter. If you check out their Twitter stream, you’ll see tons of fan RTs with comments from TWD account. It’s a relatively small lift on their part, but can be really exciting for that particular community member, especially when their tweet gets lots of engagement.

You can also create polls, quizzes and other ways to engage on social media. Walking Dead asks fans to send images of themselves, and original art, and they highlight it on The Talking Dead. 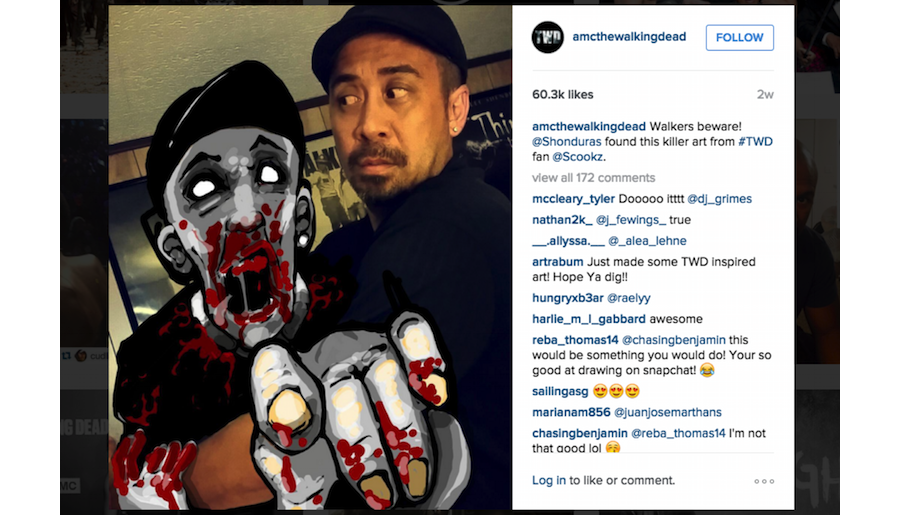 If Twitter is where you follow live conversations happening about an event, or in this case, a TV show, think about how you can stretch your content across different platforms. For instance, The Walking Dead, American Horror Story, and Scream Queens, all use Instagram as a way to post behind-the-scenes shots (an equivalent for brands could be a look inside life at your office), photos/memes from episodes, and fan “regrams” (reposting someone else’s Instagram post).

Also consider how engagement numbers differ across platforms. For instance, some of The Walking Dead’s most recent tweets received several hundred RTs and favorites, whereas their Instagram posts get upwards of 40k likes and thousands of comments (usually in the form of people tagging their friends). Think about where your audience spends their time and test into the different platforms. Check out this post for a breakdown of different social networks.

How else are you seeing these shows use social media to engage with their fans? Let us know in the comments below!